The Story Behind the Stone: Deer Isle Granite 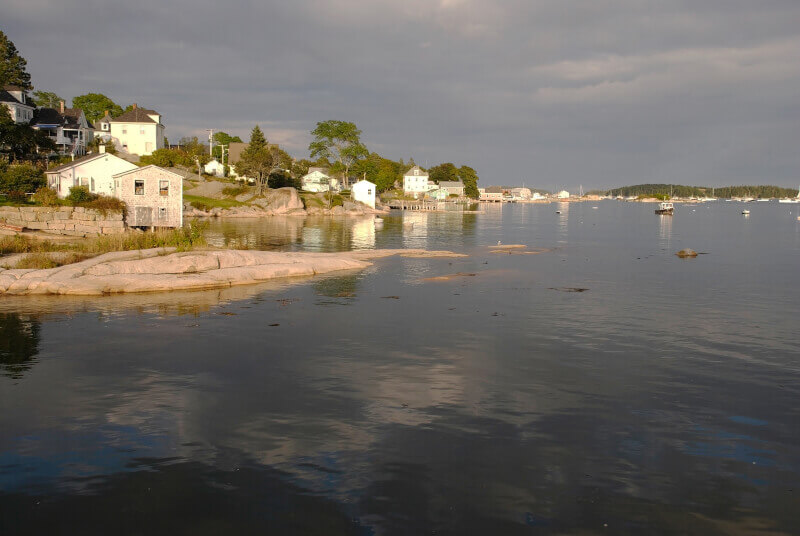 Boston Granite Exchange’s Story Behind the Stone takes us to Penobscot Bay off the rugged coast of Maine where the granite industry thrived for more than a century. There are islands scattered throughout the bay and many of them had stone quarries, but Deer Isle Granite is probably the most famous of the stones to come from the area. Although named for the larger Deer Isle, the quarry is actually found on Crotch Island off the southern tip of Deer Isle and so named because of the V-shaped inlet on its eastern side.

Quarries began appearing along coastal Maine in the early 19th century. The Deer Isle Quarry was established in the late 1860s. Back then, granite was used primarily as a construction material. At its height, there were 33 island quarries off the coast of Maine employing up to 15,000 workers. Granite was cut from below the earth’s crust in large sheets by expert quarrymen who came to Maine from Scotland, Finland and Sweden. They believed they were building the pyramids of America: all across the continent post offices, court houses, state houses, cathedrals and more were built from Maine granite in the 1800s.

Maine granite was sailed down the coast in special ships, called stone schooners, to be delivered to Boston, New York, Washington, DC and beyond. The Harvard Bridge that traverses the Charles River between Cambridge and Boston, the Tri-borough Bridge in New York and the Breakwater in New Orleans are all built from Deer Isle Granite.

Deer Isle Granite has also been used as a decorative material in building façades and monuments including Boston’s Museum of Fine Arts, The New York Stock Exchange, the Isaiah Wall at the United Nations, the memorial to President Kennedy at Arlington National Cemetery and even the new Yankee Stadium façade and the Babe Ruth Plaza outside the stadium.

As granite was replaced as a building material by reinforced concrete, one by one the quarries closed. By the mid-1960s, the granite industry was all but gone from the coast of Maine, and the Crotch Island Quarry was closed in 1966. In the late 1970s there began a revival in the use of granite in part because homeowners discovered the beauty of natural stone. The Crotch Island Quarry was reopened under new ownership in 1979 and continues to thrive today because builders continue to cherish its superior quality, rose-tinted granite.

Some consider Deer Isle Granite to be the best granite there is. The stone schooners are gone now; granite is taken by barge from Crotch Island to Stonington, ME where it is then transported by train to its final destination. In addition to its continued use for building façades and monuments, Deer Isle Granite is now used in homes as a kitchen countertop surface as well as in fireplace surrounds for a stunning look. This very traditional American stone is one of many granites available at Boston Granite Exchange. In addition to granite, we have a wide selection of other natural stones including quartzite, soapstone and marble as well as The BGE Quartz Collection.

Explore our beautiful granite inventory on our website including Deer Isle Granite. When you’re ready to select your stone for your kitchen counters of fireplace surround, be sure to book an appointment for one of our showrooms to see Deer Isle Granite and all of our fine granite as well as our extensive lines of marble, quartzite, soapstone and The BGE Quartz Collection. We’re sure you’ll find a stone that’s just right for your home.